From the point of view of logic, reasonableness, and restraint, Paul Kelly’s behaviour was admirable, but news outlets which have long been propagandists for climate alarm chose not to see that, and instead presented the bullying Turnbull sympathetically in their reports—a commendable crusader for truth and enlightenment.

Kelly shrewdly implied that Turnbull is motivated by resentment and rancour, especially towards NewsCorp, when he said to Turnbull that, “Your problem was with the right wing of the Liberal party [rather than with NewsCorp]. At the end of the day, you failed to manage it properly.”

Kelly then very sensibly asked: “It’s OK to be a propagandist for one side, but if one is a critic or sceptic about some of these issues, that’s not OK?” 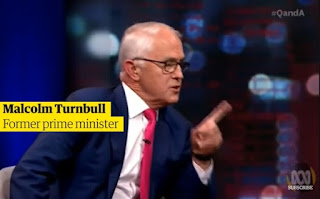 The ousted former Prime Minister avoided answering this perfectly valid observation by launching into a venomous tirade accompanied by much finger wagging:

"The company you work for and its friends in politics, like Trump and others, have turned this issue of physics into an issue of values or identity…”

This opening sentence was enthusiastically applauded by an audience that did not seem to include any climate critics and sceptics, but surely it is the climate alarmists who have done what NewsCorp is accused of. They won’t allow serious discussion of the data, and claim dogmatically that the science is “settled”. It is not.

To my mind, only someone with an exceedingly poor grasp of science and logic could think that certainty about the existence of gravity is of the same order as certainty about supposedly anthropogenic “climate-change” caused by CO2!

One expects better from a former Prime Minister of Australia.

Posted by Pavlos Andronikos at 02:51 No comments: