GREEK MUSIC FROM THE LAND DOWN UNDER! 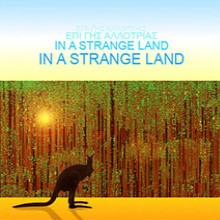 An anthology of songs and music by Australians from Greek backgrounds with the title In a Strange Land was recently released on the internet. It can be freely downloaded for non-commercial personal use from:
http://canarini.net/InAStrangeLand.html.

In a Strange Land is an honest and contemporary collection showcasing the innovative ways in which Greek Australians have engaged in the creation of music in their “strange” new land. The album ranges widely in styles from traditional Greek folk to the electroacoustic soundscapes of Stephen Adam. Greek rock is represented by the songs of Stelios Tsiolas, and opera by Irine Vela’s choral piece from the opera Little City. There is a touch of jazz in Christella Demetriou’s “Night”, and George Xylouris and Mairéad Hannan delightfully combine the sound of Cretan folk instruments with cello and double bass.

The anthology contains sixteen tracks by ten composers including:

Many of the lyrics are by the composers themselves, but seven of the tracks are a setting to music of lyrics by the writers and poets Dimitris Tsaloumas, Nikos Ninolakis, Michalis Pais, Daniel Keene, Ekaterini Mpaloukas, and Georgia Heracleous.
The lyrics vary in style from the minimalism of Andrew Kyriakopoulos’ “I’m leaving” and George Xylouris’ “There are Moments” to the richly poetic “The Pomegranate” by Dimitris Tsaloumas and “With the Lips of Heartache” by Michalis Pais. So too does subject matter vary, on the one hand Ekaterini Mpaloukas’ “On Your Balcony” evokes Greek village life, whereas Stelios Tsiolas’ “Day After Day” is about working in a car factory.
Inevitably nostalgia for what has been left behind is a theme, as in “They’ve Taken the Sun” by Nikos Ninolakis, and “The Same Sun” and “One Earth” by Georgia Heracleous, but Christella Demetriou’s “For Yianni” offers a different kind of nostalgia—a yearning for a lost love. Incisive social comment is offered in Stelios Tsiolas’ “Five Horseflies” and “Day After Day”, and in Daniel Keene & Irine Vela’s “Words Are the Poison”.
All of the lyrics, as well as translations, can be found at
http://canarini.net/StrangeLandLyrics.html.

On most tracks the composers have elected to sing their own songs and the results are impressive. Andrew Kyriakopoulos and Achilles Yiangoulli are both fine singers as well as composers. Christella Demetriou’s bittersweet voice is perfect for her two songs; Stelios Tsiolas couldn’t have found a more suitable rock singer, and George Xylouris’ bass-tinged voice is striking indeed in “There Are Moments”. It is hard to imagine any of these songs being sung differently.

Costas Tsicaderis has used other singers in the past—a much earlier recording of “The Pomegranate” was sung by Rena Hatzilepou—but it is good to have on this album two previously unheard recordings of him singing his own songs in his unique inimitable style. They may have been his last studio recordings.

The guest singers include Archie (Αργύρης) Argyropoulos, who is well known around Melbourne for his participation in various bands, particularly Rebetiki and Apodimi Kompania. He offers an excellent and thoroughly convincing interpretation of “On Your Balcony”. On that song Helen Sinis sings background vocals, but in the last verse she shares the lead so that, with the two singing alternate lines, a happy ending is suggested despite the lyrics.

Helen Sinis also takes the lead vocal in the second half of “With the Lips of Heartache”, where her richly expressive and passionate singing represents the voice of the lost daughter, whilst Markos Markou sings the narrative of the first half in appropriately sombre and sad tones.

Irine Vela’s “Words Are the Poison”, which stands out for its use of a full choir and its fluid choral and instrumental writing, features a number of strong soloists. The opening zeibekiko section is sung in Greek by Achilles Yiangoulli over a bouzouki accompaniment played by Irine herself. He is joined by Gioconda Vatcky singing a counterpoint melody in Spanish, and then an instrumental interlude ending in a cymbal crash introduces a change of time signature, and ushers in the magnificent sound of the full Canto Coro choir and the soloists Jeannie Marsh and Glenn Hadyn singing in English. This song and the synth “choirs” of the final track which follows it, Stephen Adam’s “Bluebeard”, constitute a fitting climax to the album.

Some Responses to the Album

According to one of the featured composers who is currently living in Greece, “People have been making really good comments about it!”

Here are some of the comments I have received:
My own response is similar to the last comment. The more I hear the album the more I like it, and since I have been heavily involved in the making of the album, that is remarkable. I should by rights be getting tired of hearing it, but that isn’t the case at all. It still “sends me”. It is a fine album, with many highlights, and it amply demonstrates that the contribution of Greek-Australians to the rich tapestry of Australian musical culture is one of both substance and quality.

This article first appeared in the newspaper The Greek Herald (Ο Ελληνικός Κήρυκας) in Sydney on 12 Feb. 2011.

See also the review by Dean Kalimniou on Diatribe.

Posted by Pavlos Andronikos at 18:51